‘Together We Rise, Together We Will Win!’ Solidarity Statement from Oct 1st National Day of Action to End Violence and Genocide on Transgender People organizers 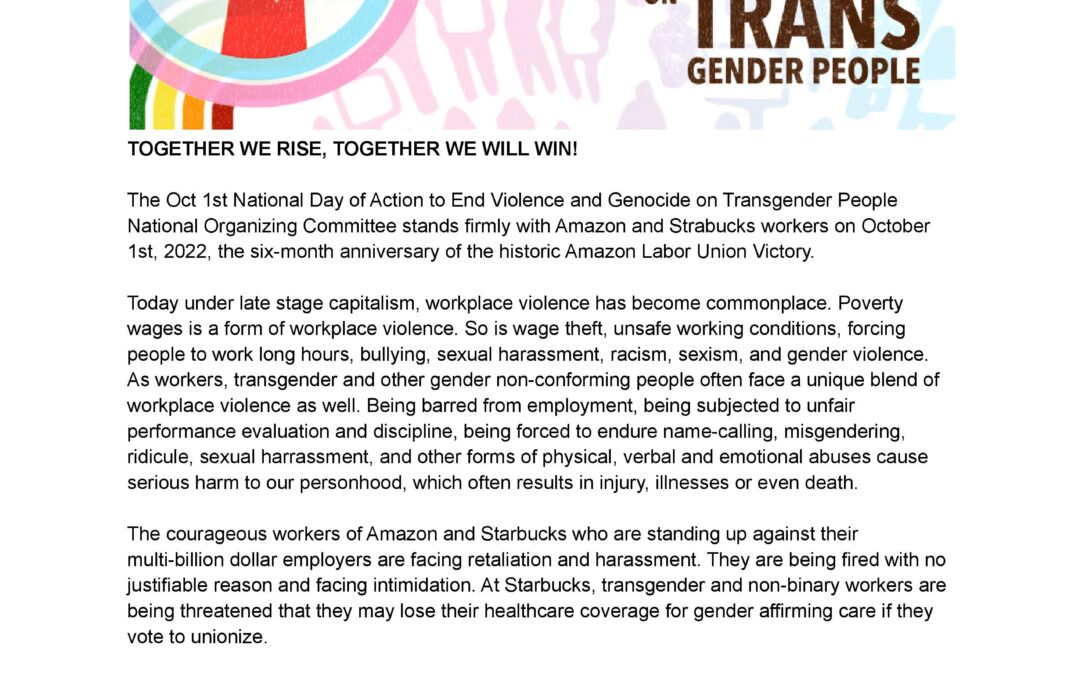 Today under late stage capitalism, workplace violence has become commonplace. Poverty wages is a form of workplace violence. So is wage theft, unsafe working conditions, forcing people to work long hours, bullying, sexual harassment, racism, sexism, and gender violence. As workers, transgender and other gender non-conforming people often face a unique blend of workplace violence as well. Being barred from employment, being subjected to unfair performance evaluation and discipline, being forced to endure name-calling, misgendering, ridicule, sexual harrassment, and other forms of physical, verbal and emotional abuses cause serious harm to our personhood, which often results in injury, illnesses or even death.

The courageous workers of Amazon and Starbucks who are standing up against their multi-billion dollar employers are facing retaliation and harassment. They are being fired with no justifiable reason and facing intimidation. At Starbucks, transgender and non-binary workers are being threatened that they may lose their healthcare coverage for gender affirming care if they vote to unionize.

The Oct 1st National Day of Action to End Violence and Genocide on Transgender People organizers are administrative workers, healthcare workers, teachers, retail workers, service workers, baristas, drivers, warehouse, factory, farm workers, and sex workers. Together we are raising our collective voices to say no to the unfair economic system that benefits only a select few and impoverishes the rest. Together we will fight till we win equality, justice, and dignity for all.