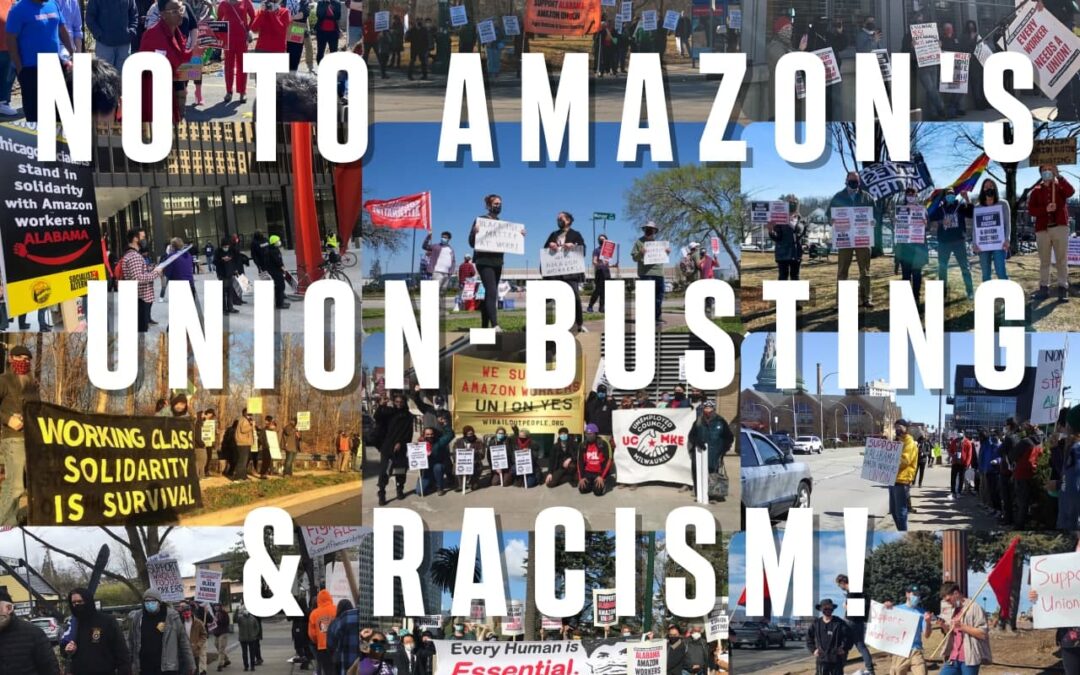 In response to the election results, we send our full solidarity to the courageous Amazon workers in Bessemer, Alabama who opened a major struggle against the U.S.’s second largest corporation. We commend the Retail Wholesale and Department Store Union (RWDSU) for their efforts and are prepared to continue to mobilize solidarity as this struggle continues to unfold.

The workers in Bessemer have ignited a national movement to organize Amazon and all unorganized workers. This campaign, led by Black workers in the U.S. South, is just the opening shot by the working class in our struggle to rebuild power after decades of capitalist offensives.

Despite the current setbacks and enormous challenges, this struggle has been immensely successful.

Amazon has incredibly intimidating power, yet workers in Bessemer dared to initiate this struggle, inspiring workers around the world to organize and to build unions. This bold undertaking sparked hundreds of solidarity actions across the world and had a positive impact on Amazon workers striking in Germany, India and Italy, as well as job actions in Georgia, Illinois, and countless other places.

The reality is that this was always an uphill battle. Amazon, led by the world’s richest person Jeff Bezos, has at their disposal not only an unlimited amount of resources to bust workers’ organizing efforts, but also a set of rules and laws that are stacked to advantage the boss over workers expressing their basic demands for good wages, safe working conditions, and power on the job.

Amazon engaged in one of the most aggressive, dirty, and illegal union-busting campaigns in recent memory. Amazon was able to successfully appeal to the National Labor Relations Board to nearly quadruple the initial bargaining unit; they held captive audience meetings with workers daily; sent multiple texts every day to workers phones; installed a mailbox on company grounds in violation of an NLRB ruling an in an effort to intimidate workers; shelled out millions to bring on some of the most vile union busters from Morgan Lewis and elsewhere; changed the traffic light pattern to frustrate organizers’ ability to talk with workers going to and from work; among many other union busting tactics that they employed to prevent the workers from winning their union.

Due to Amazon’s outrageous violations of workers rights, the election results should be thrown out and the National Labor Relations Board (NLRB) should mandate that Amazon immediately recognize the union and begin negotiations.

We must demand NO RETALIATION against Amazon workers involved in union organizing.

Only continued struggle will make this happen.

Where do we go from here?

We must also think seriously about the strategy and tactics we employ to advance from here. There is ongoing discussion across the working class movement about the development of workers assemblies as a vehicle to organize the unorganized and to continue to build community and worker solidarity. This organizing will be critical to the future. 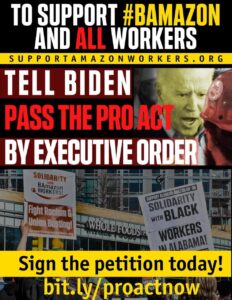 Many unions and progressive organizations are focusing attention on the necessity for the PRO Act, a set of labor legislation that would overturn right to work laws and severely restrict the kinds of union-busting tactics Amazon employed in Bessemer. We must build a mass movement to pass these laws and much more.

May Day – International Workers Day – is only a few weeks away. This will be a necessary point to mobilize around these next steps.

More assessment and discussion is needed that involves various forces to develop plans to open up a much broader struggle and collectively chart a course forward.

Despite the outcome of the vote, the new front these workers have opened up is a major advance for the working class movement as a whole. The movement that this struggle has given rise to obliges us to continue to press ahead and build off of what the workers in Bessemer began.

This fight is far from over! We will continue to do everything we can to mobilize solidarity with the workers in Bessemer as they fight for their union and challenge the outcome of this election in the weeks and months ahead, and as thousands of other workers across the country take inspiration from their heroic fight and engage in organizing drives in their workplaces.