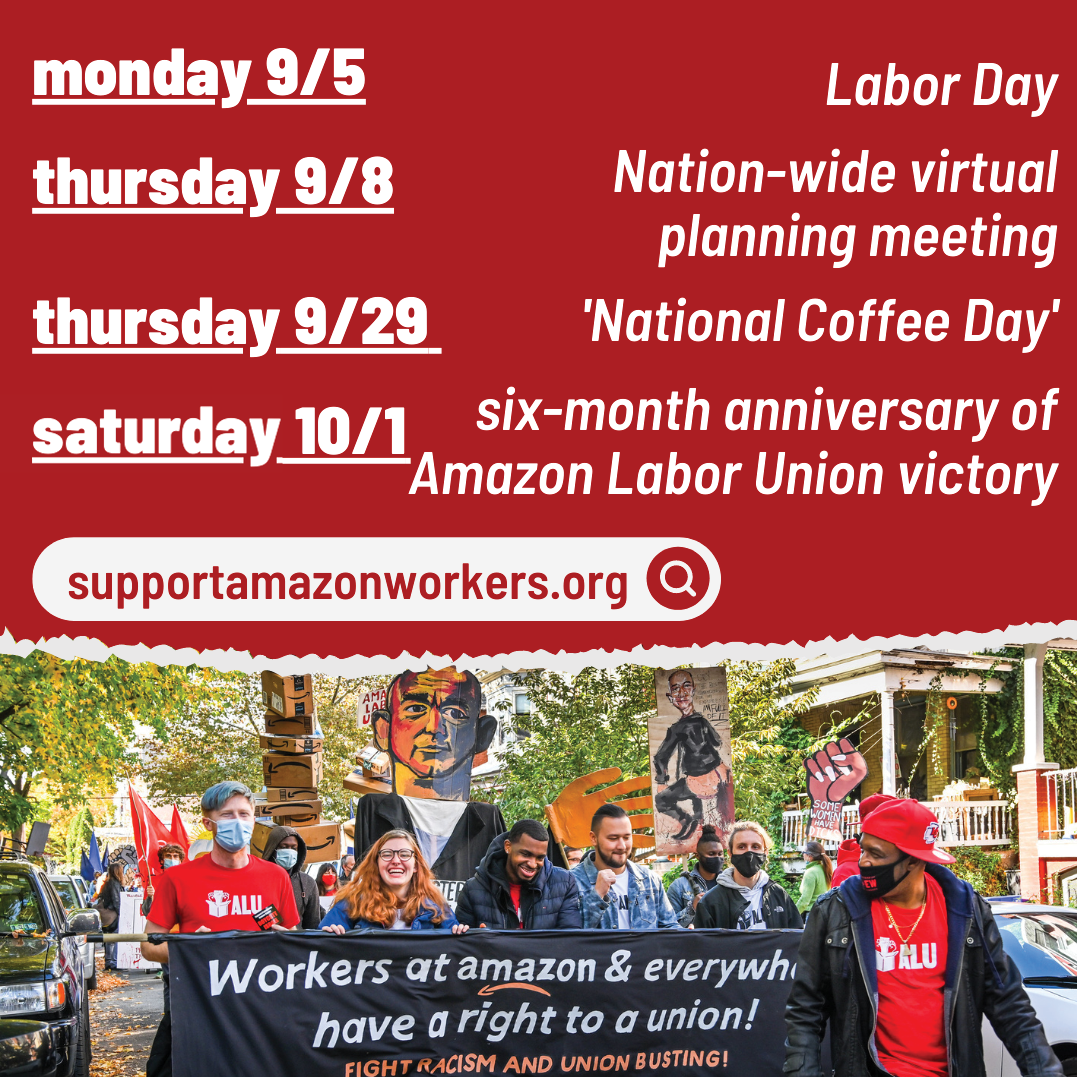 Warning: The worker organizing wave is in danger because of union busting!

The national wave of union organizing and militancy spearheaded by Starbucks workers and Amazon workers is the biggest upsurge in worker organizing since the 1930s and 1940s. The organizing wave has spread to Trader Joe’s, Chipotle, Apple, REI and a growing list of chain stores and industries.

However, this uprising of workers, which holds the potential of not only saving the labor movement but transforming it, is under life-threatening attack. We must unite in defense of the brave young workers that are the vanguard of this transformative workers struggle.

We propose these dates for coordinated mass actions across the country:

Monday, Sept. 5, Labor Day (or around that date, depending on the city): Organize a presence at Labor Day marches or organize your own action; the Amazon Labor Union is holding an action with Starbucks Workers United in New York City, Sept. 5.

Saturday, Oct. 1: The six-month anniversary of the Amazon Labor Union (ALU) election victory on April 1 (which up to this point Amazon has refused to recognize) (and also International Coffee Day).

From their corporate boardrooms down to their worksite managers, Starbucks and Amazon are engaged in an outright war to crush the organizing wave.

Starbucks is firing union organizers, closing stores, cutting workers hours and denying pro-union workers wage increases and benefits. Starbucks workers are fighting back. Starbucks Workers United is still winning union elections all over the country and flexing its muscles with walkouts and strikes.

Amazon is determined to overturn the historic April 1 Amazon Labor Union victory in Staten Island, New York, and crush the ALU. At the same time, new ALU chapters are forming around the country. Amazon workers in North Carolina have formed Carolina Amazonians United for Solidarity and Empowerment (CAUSE) and are getting stronger every day. Amazon workers everywhere, including in Amazonians United and the Retail, Wholesale and Department Store Union in Alabama, are coming together in spite of their different approaches to organizing.

In order for these groundbreaking battles to defeat union busting, immensely greater forces must join and strengthen them.

Howard Schultz and Jeff Bezos are this year’s poster boys for union busting. But efforts to crush the workers uprising are by no means limited to Starbucks and Amazon owners. Wall Street and the U.S. capitalist class are fully behind this war to destroy a new workers movement before it spreads further.

Our response to this threat must be equal to the danger. A level of mass solidarity and mass mobilization in defense of workers on the front line is required — greater than anything we have seen in our lifetimes. Unified organizing and widespread mass solidarity is absolutely central to the continuation of this historic transformation of the working-class movement.

At stake is nothing less than the long awaited and necessary evolution of the working-class movement, from its present weak state to a more radical, militant, inclusive and classwide movement that:

*Is led by rank and file workers;

*Is not dominated by business unionism;

*Is not dependent upon or subservient to the Democratic Party;

*Is a vital part of the struggle against evictions and all community struggles;

*Prioritizes the most oppressed workers, including migrant workers;

*Wants to be part of a militant global workers movement; and

*Is strong enough to smash the threat of fascism.

A growing section of the left is now engaged in varying levels of solidarity work with these critical workers struggles. But as of yet, the left’s commitment to this struggle is alarmingly insufficient. While some in the organized labor movement are taking the need for solidarity against union busting seriously, unfortunately most of the top leadership of the labor movement remain unmoved by this threat and have focused on electoral politics and reliance on the Democratic Party.

This must change. Now is the time to intensify the pressure to compel that change.

‘No Contract, No Coffee’ strike